“Prayer is the key,” is a popular saying in Christendom. So, aptly, the prayer key was used to open the occasion of the Jesutomiloluwa and Ayomiposi wedding reception.

One of the best ways to express happiness is through music and dance. Exactly that was what typified how the bridal train danced into the hall in pairs…right after the opening prayer.

And right behind the bridal train, the new couple danced in too, with the groom further expressing his joy by throwing crispy naira notes into the air for whoever cared to pick.

Expectedly, that got the whole hall wild with excitement.

Right after that, the bridal train formed a wide circle inside which the new couple joyously entertained their already ecstatic audience with their dancing expertise.

Weddings, and indeed, wedding receptions are happy occasions. Little wonder then that there is usually so much music, singing, and dancing, as there is no better way to express happiness and joy…both by guests…and especially by the close relatives if the new couple.

One significant thing in the way all the new couple’s parents, and then big brother of the groom spoke was that religion runs deep in the two families.

The new couple finally cut their cake to the spelling of J-E-S-U-S. And that was followed by the ceremonial feeding.

Eng. Fatokun then took to the floor with the new bride, his daughter, Jesutomiloluwa.

Finally, the new couple, starting with the bride Jesutomiloluwa and then the groom, Ayomiposi, spoke to Citymoods. Needless to say they were both so excited, Ayomiposi seemed close to tears of joy.

Then the whole floor was cleared for the new couple as they danced and well wishers surrounded and sprayed them.

Mrs Helen Ezekile, a well wisher from the side of the bride’s father spoke to Citymoods.

Then the chairman of the occasion, Eng. Adeniyi Oladiran, spoke to us as he exemplified humility, and prayed for the new couple.

Others, Mrs Ajao, sisters of the groom’s mother, Mrs Oyeneyin and Sidikat Omotola, and then the best man spoke to us in that order…bringing the event to a close.

From Citymoods to the new couple… Happy married life! 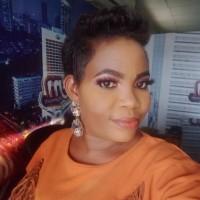