I christened it Reverse-Life in 2011 or thereabouts. And those deep into it laughed it off. Don’t bother asking what it is; I’ll tell you. They are in 2 main forms:

“What would you say is the best coinage for such manner of speaking? They are voicing the exact reverse of the reality. So I call that reverse-speak!

And who in the world today is not rich or glamorous? You think that truck pusher or pepper seller is wretched? Well, wait till you check his or her Facebook or Instagram photos! Yep!

“Packaging” is good. In fact, many a time, it is even a need. But it has been taken too far today!

Jobless uncle or aunty would borrow a friend’s dresses, go to posh neighbourhoods, and snap several photos for their social media accounts. Now, if that’s not reverse-look, then what is it?

Well, this little story involving Anita (name changed) should teach you some lessons concerning “over packaging.” Read it and learn to beware of Reverse-Life.

Anita’s rent had been overdue for long. And the landlady had finally given her eviction notice which would be enforced in a week…unless she paid up before that day.

Fortunately, Anita finally managed to run into her long-lost friend who just came home from the US for a short vac. Of course, Anita quickly told him about her overdue rent and the imminent eviction. Mr. Friend sympathised and promised to do something in a day or two. And do something he did!

Mr. Friend went home and quite excitedly went to Anita’s Facebook account. The photos he saw there blew his mind! And they would blow yours too: none of the photos was taken in and/or near the area Anita lived a one-room BQ. No, thank you! All were taken at really posh places…Banana Island, Magodo, Ikoyi, VGC, etc.

And that got Mr. Long Lost Friend thinking: hmmm…so Anita actually lives in luxury!!! And yet…she is asking him for money?

Mr. Friend worked 3 odd jobs in New York while, at the same time, going to school. And he was building a house back home. And here was a long-lost friend who actually lived in luxury…trying to scam him out of some hard-earned money. With that, Mr. Long Lost Friend made his decision.

I am not going to tell you what exactly he did. You just link the dots here. Suffice it to say that Anita never got through to Mr. Long Lost Friend anymore…and she got evicted! 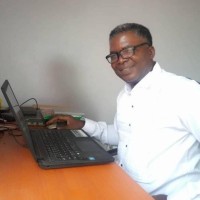